Arshil Saini aged 12 Years  ( Born on 19 July 2008 ), has broken 9 major records in karate & in computers technology & set a new record by listed in Asia, World & India. For his multiple achievements he has set a record as a “Multi Talented Kid” in India Book of Records  & is also awarded as a “Super Talented Kid” by “International Book of Records.” One of his major records in karate of “Grand  Master Certification” achieved covering Asia Pacific region awarded by “Asia Book of Records”. Also he has set a record in  “India Book of Records” for breaking marbles with one hand by a “Karate Champ” .He is a Black Belt holder in karate & awarded a Gold Medal & Trophy as a Perfectionist at Academy of Martial Arts Ambala . He has also won Gold  Medals in many karate championships.

Arshil has set a latest record in 2021 with India Book of Records for Maximum pages written in Dainik Bhaskar Junior edition. He is having a very sharp mind & is having a Microsoft IT International Certification in Computers . He has won many accolades and set a new record as a “Youngest to clear  IT International Certifications Exams” of “Microsoft & Comptia” in India  & set a new record by listing  in many prestigious record books. For the activities done at a very young age, he was honoured with “National Excellence Awards” & felicitated by World Book of Records, ( U.K.) by the first Female President of Nepal’s largest business organization “Ms. Bhavani Rana Ji” & Ms Simran Ahuja (Bollywood Anchor) at the event held at Indore in (M.P.) . He has also  set a new record & awarded  as the Youngest record holder with  “World Records India” , awarded Kalams Award & set a new record with  “Kalams Book of Records” &  appreciated by  “India Book of Records” for Commendable IT Certifications”.

He has made India Proud for all the above exceptional & outstanding achievements, he was  Honoured & Rewarded by Respected &  “Hon’ble Sh Anil Vij Ji ” { Sports , Health & Home Minister of Haryana }. His will power, intelligence & achievements  have inspired many kids to strive for the passion . He was also  awarded  a “Rising Kid” of India  by Ms. Zareen Khan {Bollywood Actress} at New Delhi . In future his aim is to become  an  Actor or to be an IPS officer &  to serve the Nation. 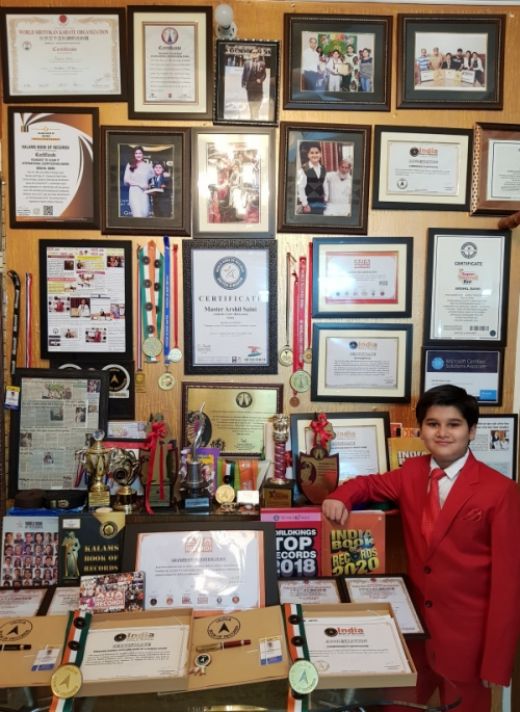