Having participated in many drawing competitions since a very small age, I have realized that each competition has some element or the other in it which makes it unique from others. Yes, every contest is different from one another. It is either the way it is conducted, the judgements, the number of participants, the type of prizes, the topic for painting or the place where it is conducted. 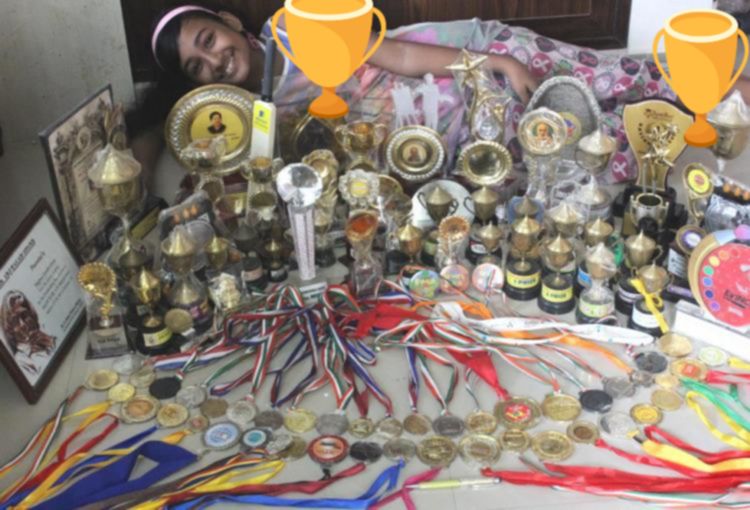 My mom regularly used to take me to participate in competitions when I was small. It is only because of her efforts that I have lots of competition-experience. There are various types of feelings that participants and parents alike go through, when they go for a painting competition. According to me, they are:

“WHAT WILL THE PRIZES BE?”

This is a common expectation among everyone who goes for painting contests. Everyone would be excited to know what the prizes will be. After winning, if the prize is not much valuable, then they feel that the competition was not worthy enough to participate. If they do not win, then they console themselves by telling that the prizes were not so good anyway. This is such a ridiculous point of view! For a good artist, the value of the award shouldn’t matter at all. He or she must be satisfied with his or her work. When compared with others, his or her painting or drawing must look better. The value of the prize does not decide the quality of a contest.

“WHO ARE THE COMPETITORS?”

This is such a funny thing to be considered when I remember going for competitions. When we reach the place, if we see someone who we knew to be a very good artist, who has won many prizes before, then we become tensed. Even I have been afraid of such things. I even used to feel, “Oh no, we shouldn’t even have come at all. She/he is sure to win the first prize!” Now, I would say, “So what if she/he is there? If the first prize is gone, the other prizes still remain!” I still remember the tensed conversations between me and my friends when we saw people who usually won prizes, which now seem really funny.

Something which is more funny to me is that, now if I go to some competition, there are people who become tensed on seeing me! Such early predictions are not useful at all. Your mind’s predictions need not necessarily happen. An excellent example is that, when I used to get tensed on seeing others, I used to occassionally win many prizes; but now, when others get tensed on seeing me, I rarely seem to win any prizes at such contests (I’ve not attended much contests for the past 1 or 2 years, but that’s another thing..)

This may or may not be felt by a participant. Some may be so confident that he/she will surely win, while some may have doubts when he/she saw other paintings which were better that his/hers, or one may not be satisfied with his/her own painting. I have felt all these three, to be honest. Sometimes, due to the time-restriction, I would have hurried up my work and as a result, spoiled everything. Sometimes, I would have seen other paintings and would be sure that that would win. There are so many situations like this.

When we sit down to paint during a contest, there are many audience. Usually, the parents aren’t allowed to see us working, but on few rare occasions, they do get a chance to peep in. But mostly, it is the organisers and sometimes judges who constantly watch what we’re all doing. And sometimes, this would be so irritating, that you won’t be able to concentrate! If your painting looks good and bright, then it’d be worse. They’d ask us to move away our heads so that they’ll be able to get a clear view or even take a photo. Some people even take interviews and ask questions like, your age, your drawing teacher’s name, your school, or your picture’s meaning. So important, when we’re trying to finish our work within a stipulated time!!

Sometimes, during the last 5 or 10 minutes, when we’re supposed to do the finishing touches in a tensed mood, the parents barge in. My mom wouldn’t disturb, she’d just smile at the output of my 1 or 2 hours of painting. But not all moms are like that. Some parents are so adamant that they’d not leave without a clear photo of all the good paintings. Some parents also just watch you painting. It’s not bad, but it’s quite disturbing for those who are painting. Some people are quite polite. They ask questions about us only after they’re sure that we’re free and calm, after handing over the painting. Earlier, I used to be so much disturbed and distracted by such things. But, as the years went on, I didn’t mind them at all. In fact, I would feel their curious questions and opinions funny, that I would have to hold back a smile.

On-the-spot-topic painting competitions are just like exams in my point of view. We never know what they’d ask. In my opinion, they must provide some thinking time like the question-paper reading time they’d provide in the Board Exams. But on-the-spot topics are the best contests which really bring out the creativity in you. Already known topics only help in memorising what you’ve prepared and vomiting it onto the drawing sheet.

This is one of the most irritating things in a competition for everyone. It mostly wastes a whole day. Especially for the people who didn’t win anything. Instead, some organisers conduct the contest, announce the prizes through phone the next day and distribute the awards in a separate function. I feel this is the best arrangement. If we haven’t done well, then it raises a doubt whether to wait for the announcement or not. This is the time when we ourselves draw to a conclusion whether we’d win or not.

The heart beats fastest during this time: when they announce the results. Sometimes, I’d be just sure that I’d win something, when my name would be called for the first place. Sometimes, I’d be sure that I’d win the first place (a foolish thought), when my name would be called for the last consolation prize. Sometimes, I would be so expectant, but then I wouldn’t have won anything. Sometimes, the judgement would be so outrageous, that they would have given the first prize to a painting, which was not even fully coloured, not bright and didn’t have many concepts, whereas other paintings were better. Such results showed that the judgement was done not based on how good the painting was.

But on the contrary, I would like to say that, painting competitions are a nonsensical practise. In fact, competitions themselves are impractical and have no logic. If the judges are not up to the capability of choosing the best performance, or the best piece of art, then there’s no use of such competitions. And moreover, every single person has a different talent in every field of art, be it painting, dance, music or acting. Each one’s participation and effort must be appreciated.

Competitions are only good for fostering the competitive spirit in oneself. It may or may not improve the skill or talent one already has, because that is based on the dedication and hard work of the person. Competitions are bound to discourage young minds who somehow fail to make it to the winner’s position, as well as negatively increase the amour-propre in winners. Participation in various competitions is important, because it reveals how many such budding minds and talents are out there in this world. But all these skills must be encouraged to continue, so that there are no negative feelings at the end of any competition.